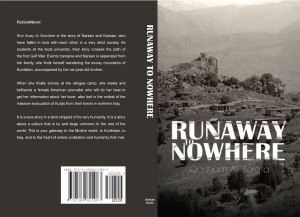 Runaway to Nowhere is the first novel by Kurdish-American author Qasham Balata. She was born in Duhok (South Kurdistan) in 1968 and now lives in Boston, MA, USA.

My novel’s events happened during the Kurd’s uprising after the first Gulf War and their mass exodus from Northern Iraq to refugee camps along the Turkish and Iranian borders and when the western journalists compelled the first Bush administration to establish the safe haven better known in the 1990s as ‘the Northern No-fly zone.’ In my book I wrote about modern Kurdish history, tradition, and women.

Kani Xulam of the American Kurdish Information Network (AKIN) published a reflection on the book yesterday on the AKIN website and he describes it as a book about love, war, and the haplessness of the Kurdish woman.

But it is a serious novel that tells a story of love and loss and separation. Xulam’s reflection continues…

It is a war drama. It starts off in a place called Mosul. For those of you who don’t know of the place, it is a dusty city on the banks of Tigris. But for the narrator, a Kurdish woman, who attends its university, it comes close to being idyllic. Initially, you are thrown off by the incongruence of the comparison, but soon you realize that even Nome, Alaska would have qualified for the same description. The reason: it is away from home.

Pray to God that war has not knocked on your door for a visit, says Xulam’s reflection. He mentions war and the mountains and their indifference to the young and the old.

In the words of one character, they [the mountains] devour especially ‘children under three years old and [the] elderly.’  Cold wears the robes of the angel of death.  Hunger and thirst aid and abet and thousands are lowered into shallow makeshift graves.  You can’t help but remember your Thomas Hobbes from college.  Life, as the English philosopher once so memorably put it, is ‘solitary, poor, nasty, brutish, and short’ in the spring of 1991…

The reflection leaves us with a wish from Nareen, the narrator, who ‘becomes the reluctant chronicler of this mass exodus’ to the mountains. In a conversation Nareen has with her American photojournalist friend, Emily, she says she wishes ‘we had a united Kurdish state –a wish that will continue to live in my heart and the hearts of millions of Kurds across the globe.’

To read the rest of the thoughtful reflection penned by Kani Xulam, visit the AKIN website.

To learn more about the author, visit her book’s website.

After that, go buy the book!

8 thoughts on “Runaway to Nowhere”