Does anyone really believe the findings of the Sardasht Osman murder investigation? It doesn’t seem so. The Committee to Protect Journalists (CPJ) said the report lacks credibility and it was ‘dismayed by the deficient inquiry.’ Reporters without Borders called the inquiry ‘unconvincing.’ A group of Kurdish journalists meeting in Suleimania with the Metro Centre press freedom group called the inquiry ‘disappointing.’ They are, without a doubt, being polite in their public statements.

Sardasht’s brother, Bakr Osman, condemned the findings calling them ‘baseless.’ In a statement issued in Hewlêr (Erbil), Bakr and other family members expressed their resentment and called for an independent inquiry.

On 04 May of this year unidentified gunmen approached Osman on the university campus where he was a final-year English student, beat him and dragged him into a white passenger van. He was found shot to death in Mosul two days later. His body was dumped outside the Patriotic Union of Kurdistan (PUK) headquarters. He had two bullet wounds through the mouth, a symbolic punishment for someone who has spoken out.

Osman, 23, was a student at the University of Salahaddin- Hewlêr, a reporter for Ashtiname and a regular contributor to independent news Websites Sbei, Awene, Hawlati, and Lvinpress. He would have graduated in June. 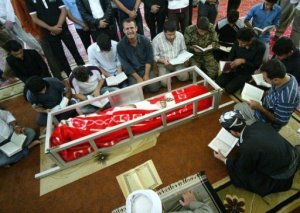 Shortly after his death, Osman’s brother Beshdar told CPJ that he was convinced that Sardasht was killed because of a critical article he wrote in the independent daily Ashtiname in April about a high-ranking KRG official. ‘In the last few months my brother received a number of phone threats, demanding that he stop meddling in government affairs,’ said the brother back in May.

Osman also penned a satirical Web-based piece for the Kurdistan Post, I am in love with Massoud Barzani’s daughter, in which he envisioned himself as Barzani’s son-in-law with all the luxurious trappings and benefits that go along with being part of the ruling family. For example, he wrote that he ‘would hire a couple Italian doctors to treat [my diabetic mother] in the comfort of her own house. For my uncles, I would open few offices and departments and they, along with all my nieces and nephews would become high generals, officers, and commanders.’

Criticism of the government’s actions or its ruling elite is not tolerated, however. Reporters Without Borders believes that the KDP (Kurdistan Democratic Party) and PUK, the two ruling parties that control Kurdistan, have reached a ‘tacit strategic accord’ to restrict the freedom of journalists as much as possible. ‘Anything goes for the KDP and the PUK as far as muzzling the press is concerned,’ the press freedom organisation said.

So now, after a 5-month investigation, the special committee released a meager 430-word (words!) report claiming that terrorists are to blame. See English version of report here.

After the special committee, headed up by the KRG’s Interior Minister, Karim Sinjari, ‘collected and analyzed different information from various sources’, they ‘learned’ that Hisham Mahmood Ismail, a 28-year-old Kurdish mechanic from Mosul, was involved in the abduction of Sardasht Osman. Ismail is allegedly a member of Ansar al-Islam, a radical Islamist group. So under the supervision of the committee and supposedly through the authority of the court, the Asayish in coordination with the local police near Mosul, arrested Ismail and turned him over to the investigation committee. The 430-word report says that ‘after interrogating the arrested suspect, he confessed that he was involved in the crime.’

‘After interrogating the arrested suspect…he confessed.’ Possible translation: the alleged suspect was beaten and tortured and eventually forced to sign a confession. Arrest warrants have apparently been issued for other suspects, who will surely ‘confess’ as Ismail did.

Ansar al-Islam, formerly based mainly in the mountains around Halabja, has been fighting against the Kurdish authorities in the Kurdistan region, and against the Iraqi government and US forces outside the Kurdistan region since its formation in 2001. It has carried out numerous armed and suicide attacks, including kidnapping, torture and killing of civilians, as well as killing members of security forces after capture.

Until early 2008 the KRG held hundreds of detainees without charge or trial on suspicion of belonging to or sympathising with Islamist groups, in particular Ansar al-Islam. By September 2008 the majority of these had been ‘pardoned’ and released. However, scores have remained in detention in prisons controlled by the Asayish, the KRG’s main security agency.

On 25 May, The International Press Institute published an open letter signed by eighteen foreign correspondents, who called on Massoud Barzani and Jalal Talabani to launch an independent investigation into the murder of Sardasht Osman. The corresponsdents, who have long covered the region, include Chris Kutschera, Quil Lawrence and Martin Woollacott. The 18 also called for a public commitment from the KRG to Articles V and VI of the Kurdish Press Law of 2008 calling for severe punishment of anyone, including the security forces, who attacks members of the press.

The correspondents received a response from Karim Zibari on behalf of the office of President Barzani. ‘We are confident that no shred of evidence will be overlooked and take very seriously the importance of sending a clear message that the intimidation of any citizen of the Kurdistan Region will not be tolerated.’ Zibari also wrote that it was ‘extremely unfortunate that the tragic death of this young Kurdish student has been exploited for the personal political gain of a few.’

The correspondents wrote back on 31 May that they ‘anxiously await the findings of an independent investigation designed to uncover the culprits and prevent further intimidation of journalists in Iraqi Kurdistan.’

Protest in June. Demonstrator holds up photo of Sardasht Osman.

Well, the ‘findings’ have been announced but do little to ‘uncover the culprits’. The special committee, lacking any shred of independence, claims that Ansar al-Islam is back, operating in the middle of Hewlêr. It defies logic and reeks of a cover-up. Ansar al-Islam is a convenient scapegoat.

The murder of Sardasht Osman is only the latest in a string of violent, often deadly attacks against Kurdish journalists. Last year, Kurdish journalist for Lvin Magazine Soran Mama Hama was murdered in front of his house in Kirkuk after he had written articles that offended government officials. On 20 April 2010, regional security forces attacked at least 16 Kurdish journalists reporting on student demonstrations in Suleimania. Some were beaten severely by police, and others had their cameras taken and their photographs destroyed. On 28 April, police interrogated the editor of the journal Hawlati, Kamal Rauf, for five hours after he published information on the absence of public services in a Kurdish village. Another editor, Fuad Sadiq, lost his job for criticising Prime Minister Barham Salih. Hakim Qubadi Jali Zada, a Kurdish jurist and poet, was dismissed as a judge in Suleimania for writing an article in the newspaper Hawal that disparaged aspects of the judicial system.

Sadly, Sardasht Osman will probably not be the last victim of the government’s suppression of the freedom of the press. He knew he was in imminent danger for his writings, as do many journalists. But he courageously persevered, fully expecting his tragic end.

In a piece entitled ‘I heard the first ring of my death’ Sardasht Osman wrote the following (excerpt):

In the last few days I was told for the first time that there isn’t much left of your life. To put it in their own words I have no permission to breathe in this city but I fear neither death nor torture. I am waiting for … my killers. I pray that they grant me a tragic death, which deserves my tragic life…. I want them to understand that what scares us is not death but the continuation of such days for our next generation…. The tragedy is the authorities don’t care about the death of the generations…. Whatever happens I will not leave this city, and I will wait for my own death. I know this is the first bell ring for my death but at the end it will become a ring bell for the youth in my society.

Read the complete version of I heard the first ring of my death.

Iraqi Kurdistan: Parties in ruling coalition agree to gag the press. KurdMedia, 6 May 2010

Cockburn, Patrick Cockburn and Terri Judd. Iraq: the most dangerous place on earth for journalists. The Independent, 14 June 2010.

I am in love with Massoud Barzani’s daughter, a poem that kills. KurdMedia, 10 May 2010.

1 thought on “For whom the bell tolls. It tolls for thee, Sardasht Osman.”